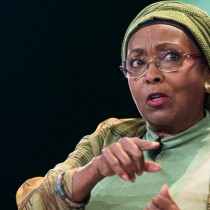 Adna Adan
HARGEISA- President Silanyo appointed Ms Edna Adan Ismail, a former foreign minister, as the special envoy to the Somalia and Somaliland talks. Edna Adan is a well-respected veteran politician who is known for her contributions to the health care system of Somaliland by building the first maternity hospital in Hargeisa.
Edna Adan is a very strong critic to Somalia and delivered many speeches showing her rough stance on the unity of Somali Republic. She represents the Somalilanders who are extremely against unity.
Somaliland and Somalia united in 1960 to form the Somali Republic. Somaliland claimed independence in 1991 after Siad Barre regime accused of committing mass killings in Somaliland was ousted from power.

Somaliland was not able to get international recognition, but it managed to build peace and functioning government.
The two sides started talking to each other in 2012. Since then a number of rounds of talks were held.
This is the first time Somaliland appointed a special envoy to represent it at the talks.
These talks were on halt since last year and it is not clear if they will resume.
A new president was selected in Somalia in February this year while Somaliland will have a presidential election on 13 November 2017.