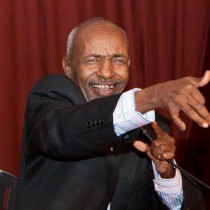 Hussein Hersi Abdi was a talented comedian
One of the best and leading Somali comedians of all times, Hussein Hersi Abdi, famously known as Boon Hersi, died last night at his home in Hargeisa.

Comedian Hussein Hersi Abdi, famously known as Boon Hersi, died last night at his home in Hargeisa. A well-respected and prominent actor and song writer, his fame raised during the heydays of Somali music in 1970s and 1980s.

He was a member of the Somali legendary band, Waaberi, whom their music and drama still remain leading even though the band demised after the collapse of the central government of Somalia in 1991.

The unexpected death of Boon Hersi shocked many Somalis around the globe who took the social media to send their condolences.

In recent years born retired after he lost his eyesight to exploded cigarette lighter.