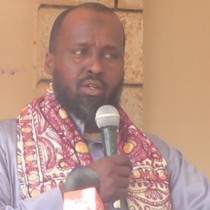 Photo: mayor Mohamed
Hargeisa- The mayor of Burao, Mohamed Yousuf Abdirahman, today publicized a decision ordering restaurant not to allow men and women to dine together.

The prohibitive decision decreed by the mayor is not based on legislation.

The decree was addressed to Warsan restaurant.

Warsan restaurant is one of the few restaurants in Burao that allow men and women to dine together. It serves Ethiopian traditional dish.

The police in Burao, a city located in eastern Somaliland, has closed down the Ethiopian restaurant on 31 August. It was later reopened after a warning was given to the owners, according to Burao police commissionaire.

Men and women to eat together in restaurants are against Islamic law, says the decision.

The decision orders Warsan to establish different venues for men and women. It says such segregation is required to be enforced by all restaurants in Burao.