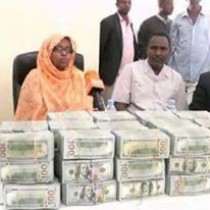 "The money is half of ten million US dollars signature bonus that was agreed DP World to pay. The other half is coming,” the Minister said, speaking in a press conference held at the Central Bank. "The money was sent through remittance company” she added.

The money was publicly displayed in a press conference.

In 2016, DP World was awarded a concession agreement to manage Berbera Port.

Critics questioned the process of awarding and the future of the employees of the port. People who opposed the deal including traditional leaders were arrested by the government.

According to the government, the company will invest the Port 442 million US dollars and will have 65% of the income.

DP world is UAE based company which operates multiple businesses – from marine and inland terminals, maritime services, logistics and ancillary services to technology.

Jama Ahmed Jama is the Editor-in-Chief of Somaliland Daily