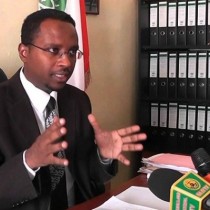 Adam Haji-Ali, the Chairman of the Supreme Court
Hargeisa- In Saturday, the Supreme Court ruled in favour of an Ethiopian refugee mother. The case where an Ethiopian national and three local people disputed the paternity of a child commenced from Sool Regional Court.
Speaking to the media, the Chairman of the Supreme Court, Adam Haji-Ali Ahmed, said the case was sensitive and important. In a press conference, he said DNA test solved the dispute.
The mother who won the case spoke to the media and praised the court saying she was not expecting a local court to rule against nationals.

The publicity of this case is a part of a series of press conferences held by the Chairman of the Supreme Court who was appointed in 2015 after his predecessor was fired by the President. Critics accuse the Chief Justice of politicizing the judiciary. However, he is also commended for willingness to change.
Somaliland Daily avoided to use the names of the mother and the child for ethical grounds.
About the author
Mohamed J Ismail is a reporter for Somaliland Daily