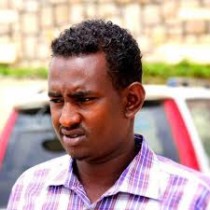 The lawyer of Dirir was not informed of the hearing date, according to his lawyer, Abdi. His family was not also aware of the hearing, family members told Human Rights Centre.
Dirir was arrested on 16th September 2017 in Hargeisa. The prosecution accused him of defamation and publishing false news in relation to articles that allegedly accused Noradin School, a privately owned school based in Hargeisa, of misconduct against the female students of the school.
"We are stunned by the way the court handled the case. Dirir was denied of the basic fair trial rights enshrined in the Constitution of Somaliland and the Criminal Procedure Code. He has a right to attorney and defence according to articles 27 and 28 of the Constitution,” says Guleid Ahmed Jama, the chairperson of Human Rights Centre.
"The speed and secrecy of the hearing are unacceptable and worrying practice. Criminalization of the media is not a solution and is against the Constitution and the Press Law. We call on the government of Somaliland to immediately release Mohamed Adan Dirir,” he added.
Guleid Ahmed Jama
Chairperson of Human Rights Centre