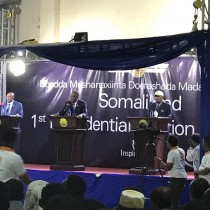 From left: Abdirahmaan Mohamed Abdilahi of Waddani, Muse Behi Abdi of Kulmiy party and Faisal Ali Warabe of UCID party
Hargeisa- The three presidential hopefuls running for the highest office of the country were asked questions on security, justice, human rights, economy, foreign policy, education, and health.
The questions and answers sessions were divided into two parts moderated separately by two journalists.
The debate was live on Somali televisions and online media.
Inspire Group with the support of the Somali speaking televisions organized the event.

Faisal Ali Warabe of UCID party, Muse Behi Abdi of Kulmiy party and Abdirahmaan Mohamed Abdilahi of Waddani participated in the debate.
On 13 November this year, one of the three men will be elected as the fifth president of Somaliland.
The debate was less controversial with few personal attacks.
However, Faisal Ali Warabe of UCID accused the other two candidates of "having campaigns.”
Muse Behi Abdi blamed Abdirahmaan Mohamed Abdilaahi of being sympathetic for Somalia. Abdirahmaan rebuffed the accusations and said Kulmiye started Somaliland and Somalia talks.
The debate was welcomed by the Somalilanders who took the social media to express their jubilation as democracy was in action.
Somaliland started the journey of representative democracy in 2001 when a constitution was approved in a referendum by the people. The first presidential election took place in 2003. The second election in 2010 entered the history as the then incumbent lost to the opposition. The defeated sitting president handed over power smoothly.
The candidates had similar concerns on the economic problems, inflation, unemployment, and reform of the security sector. But they disagreed on the policies towards solving these matters. The questions were very general and enabled the candidates to use broad and ambiguous remarks to give answers.
They also agreed on improving Somaliland’s relations with Ethiopia and Djibouti.
Muse Behi Abdi showed discontent with the ongoing Somaliland and Somali talks and accused the leadership of Waddani of flawing the talks. Although he did not name, it was understood that he was blaming the former minister of the presidency and former foreign minister who are now members of Waddani.
Abdirahmaan said that these former ministers were working on Kulmiye policy and such failure is to be attributed to Kulmiye.
Faisal took another course and said he will hold in Hargeisa a reconciliation conference for Somalia to mediate the disputing parties and then seek them to recognize Somaliland.
On Ethiopia and Djibouti, Faisal said the trade is not currently balanced and promised that he will create economic integration based on equal footing.
The candidates also had similar positions on reforming the judiciary. But differed the details.
The questions asked by the moderators were very general and as such the answers lacked specificity.
From the responses of the public in the social media, Faisal Ali Warabe was the lead.