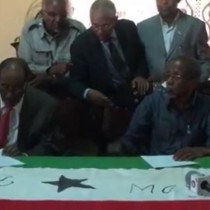 The parties agreed "the militias of Khaatumo shall become nationalized and the country to have a national army that secures the borders, existence, and interest of the state,” the agreement says.
The two parties agree to "establish justice, equality, and peaceful co-existence.”

The two parties have been negotiating to solve a conflict that caused deaths. The conflict started after Khaatumo was founded as a regional administration under the Federal Government of Somalia, a claim Somaliland rejected.
The parties also agree "to re-open the constitution to secure power sharing based on justice and equality, and to assign a permanent committee to do that work.”