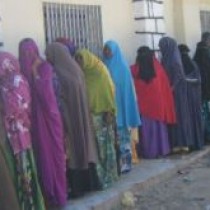 Photo credit: NEC
Hargeisa- The international observation mission in the upcoming 13th November 2017 presidential election arrived in Somaliland, hoping "for a successful and peaceful poll."
The international election observation mission (EOM) is funded by the British government and will conduct activities in accordance with the "Declaration of Principles for International Election Observation, emphasising the impartiality of that observation,” the mission said in a press release.
The Development Planning Unit (DPU) at University College London ( and Somaliland Focus UK are leading the Mission.

"Team co-ordinators will examine all aspects of the pre-election campaign, including access by political parties to locations for campaigning, the equality of access to the media, and the procedures that will be employed for the distribution of election materials, voting itself and the counting and tallying of ballots,” the mission says in its press release.
The full team will arrive on 8th November and will leave on 16th November. The members of the Mission are coming from 24 countries.
The mission "will observe polling stations across Somaliland’s six regions, and will publish its final report in the first half of 2018,” says the statement.
"This election will mark a milestone in Somaliland’s electoral development as it will be the first time that the incumbent has not challenged for the top job. As ever, there have been complex realignments in the positioning of different groups, and a peaceful and credible poll would represent a significant step forward in the consolidation of the representative democracy that has become such an impressive hallmark of Somaliland politics over the past 15 years,” says Dr Michael Walls of DPU, chief observer on the Mission.