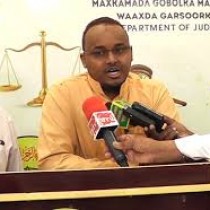 Photo: Ahmed Dalmar Ismail, the chairman of Hargeisa Regional Court
Hargeisa- The Chairman of Hargeisa Regional Court, Ahmed Dalmar Ismail, told the media that the court sentenced Abdiqadir Mohamed Ismail to one a year of imprisonment for spreading false propaganda against the court.
Abdiqadir is charged after he posted a live video streaming showing a court clerk at Hargeisa District Court asking him 10 US Dollars. Abdiqadir allegedly accused the court of asking him a money for issuing two pages long court decree.
The judge who delivered the verdict said the money was not a bribery but charged for the printing of the decree.

The convicted man had a case at the district court in Hargeisa. After the court made its decision, a clerk asked him to pay 10 Dollars to receive the document.