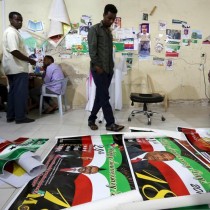 People work in a printing studio as they prepare materials to mark the break-away of Somaliland from Somalia in Hargeysa, May 16, 2015. © 2015 Reuters
Laetitia Bader-Senior Researcher, Africa Division, Human Rights Watch-- On November 13, the self-declared autonomous state of Somaliland will be holding presidential elections, the third since declaring independence from Somalia in 1991. The incumbent is stepping down and the elections are pitting the ruling party's candidate against two opponents, in what commentators describe as a close race.
Today, the national electoral commission announced at a press conference that it will be imposing a shutdown of social media from November 13 until the election results come out.
While governments have sought to justify such bans on the grounds that election commentary may spark violence or the proliferation of "fake news,” the public’s access to information is key to free and fair elections.

A May 2015 joint declaration by inter-governmental experts on freedom of expression states that shutting down entire parts of communications systems, "can never be justified under human rights law.” Government restrictions should be law-based and a necessary and proportionate response to a specific security concern, not simply to curtail the flow of information.
The proposed Internet shutdown would be a first in Somaliland, but not in the region. In several countries, including Sudan, South Sudan, and Ethiopia, telecommunications authorities have deliberately blocked the Internet for days or longer during periods of social unrest and elections.
In November 2016, the African Commission on Human and Peoples’ Rights raised concerns over, "the emerging practice of State Parties of interrupting or limiting access to telecommunications services such as the Internet, social media, and messaging services, increasingly during elections,” and called on governments to guarantee, respect, and protect citizens’ rights to freedom of information and expression through access to Internet services.
Somaliland officials should acknowledge the critical role the Internet plays in its development and democratization process. And, if they are concerned about the spread of "fake news” and social unrest, they can disseminate accurate information and discourage violence.
Somaliland has the chance to conduct elections in a manner that promotes genuine participation. It should step back from taking measures that would thwart this.