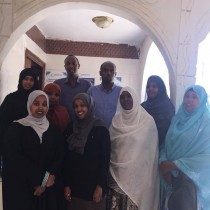 Photoe file: Members of the Group.
Hargeisa- The Human Rights Defenders Group is ad hoc gathering of human rights organizations and defenders who are united by the purpose of ensuring the protection and promotion of human rights during the election period issued a press statement.
Below is the full statement of the Group:
On 15th November 2017 demonstrations occurred in parts of Hargeisa, Buroa and Erigavo after members of Waddani opposition party held a press conference in which they made allegations of "irregularities”. On 13thNovember 2017, Somaliland held a presidential election competed by three political parties.

Two civilians died in Burao and other four were injured by the security forces including the police and the military who used live bullets to disperse protestors. In Hargiesa, female street vendor died after she was hit by a bullet and at least five people were injured.
In a statement, the Minister of Presidency stated that members of the security forces sustained injuries caused by stones thrown by protesters, according to the Minister.
In Buroa the military was part of the security forces that intervened to disperse the protests, according to eyewitnesses.
the Election Day, opposition members were briefly detained. Hamse Khayre, the campaign manager of Waddani, was detained in Gabiley and Bashe Yousuf Ahmed, the Chief of Staff of the presidential candidate of Waddani and Fatimo Saeed, a senior member, were detained Hargeisa. They were all released on the same day.
The social media was shut down from 13th to 17th November 2017.
"We call on the security forces to restrain and avoid using live ammunition against civilian protestors. The military shall not be used to intervene in internal disturbances and protests of civilians,” says Faisa Aw Ali, the chairwomen of the Human Rights Defenders Group.
"We call on all parties to use peaceful channels, and not to make any violence. All grievances shall be resolved peacefully” she added.
Contact:
Faisa Aw Ali Yousuf
Chairperson of the Human Rights Defenders Group
Email: faizayussuf@gmail.com
Phone: 063 4418771