"I decided to accept the sham and fraudulent results", says opposition presidential candidate 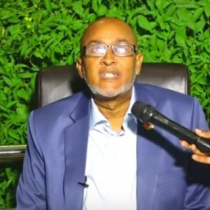 Photo file: Abdirahmaan Mohamed Abdilaahi, opposition presidential candidate
Hargeisa- Abdirahmaan Mohamed Abdilaahi, the main opposition candidate, said the 13th November presidential election was rigged by the ruling party.
Abdirahmaan spoke hours after the ruling party candidate was declared the winner of the election by the National Electoral Commission. Speaking at a ceremony held at the headquarters of the electoral body, Chairman Abdikadir Iman said the election was free, fair and credible.
The security forces and state resources were used to rig the election, Abdirahman said.  There was no free and fair election, he added.

In an emotional speech, he stressed that the election is based on fraud.
"I am not conceding defeat for Muse Behi and Kulmiye, but I conceded for the peace, solidarity and unity of the people of Somaliland,” he said.
Abdirahmaan said party leaders and members are in prison, and he asked the government to release them.
"The army is deployed in some parts of the cities,” he said.
Muse Behi, the president-elect, spoke to the media in a reconciliatory tone. He said that he is ready to talk to the opposition.