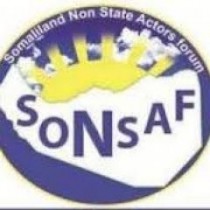 Hargeisa- The secretary general of the opposition party, Waddani, has accused the Somaliland Non-State Actors Forum of being partisan.

Khadar Abdi, the secretary general, spoke on Sunday, to the media after a documentary called Baadi Goob made allegations of fraud in November 2017 presidential election.

"SONSAF is not impartial, and members of its board are members of the central committee of Kulmiye,” he said.

Kulmiye is the ruling party of Somaliland.

"it [SONSAF] is an institution that is mixed with the government and Kulmiye,” he added.

He said they complained about SONSAF in earlier and made their position clear.

SONSAF is an umbrella of businesses, religious and traditional leaders as well as some civil society organizations.

SONSAF has not commented about the allegations made by Waddani and the documentary.