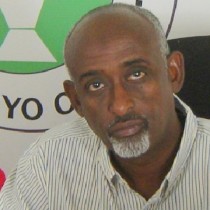 Photo: Jamal Aidid, a member of the committee who spoke to the media
Hargeisa- A committee consisting of traditional elders and businessmen from Somaliland visited Puntland for seeking peace, according to the committee

Jamal Aidid, a politician and businessman, who spoke to the media at Hargeisa airport on arrival said the four days "peace visit in Garowe was successful.”

Jamal said they discussed with Puntland about "creating a mutual understanding to breach the gap” between the parties.

"We will brief the government of the Republic of Somaliland,” he said.

Jamala did not clarify if they met the government of Puntland.

But he said they agreed five points:

1. Continuation of the peace process to end the bloodshed of the brotherly people;

2. To end the conflict in a peaceful manner;

3. To avoid everything that can inflame the situation such as propaganda;

4. To carry out awareness on brotherhood and avoiding hatred;

5. To work on securing the exchange of prisoners [of war].

The committee returned to Hargeisa on yesterday, 15th July 2018.