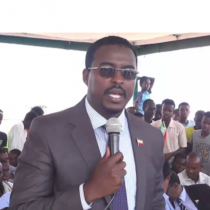 Deputy minister Buuni
Hargeisa- The deputy minister of planning, Hussein Buuni, said his government will no longer tolerate Waddani, the main opposition party.
Responding to allegations made by the spokesperson of Waddani, Barkhad Jama Hersi, he said the accusations of Waddani are insult and defamation to the president.
Barkhad said the president is busy in building houses for himself whilst the country is in severe drought and economic hardship.
Buuni contended that these remarks are not acceptable and will not be tolerated. He said it is an insult to the president of Somaliland, Muse Behi Abdi.