Somalia is reluctant to return to talks, President Muse Behi 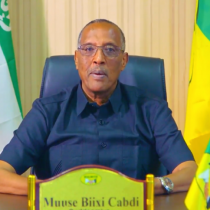 Hargeisa- President Muse Behi of Somaliland said Somalia is reluctant to resume the suspended talks between the two sides.

He said the talks are scheduled to take place in Accra, the capital of Ghana, in 19th March this year. But Somalia does not want to attend, he said.

The prominent Geeska Afrika newspaper reported today that the president made a mistake about the place of talks. The paper said the talks are planned to happen Ankara of Turkey, not Ghana.

There is no official government confirmation.