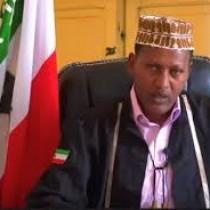 Hargeisa- The chairperson of Hargeisa District Court, judge Abdirashid Beergeel, has issued unexpected judgment sentencing a man to death by stoning and flogging a woman 100 times.

There was no criminal case pending before the judge. The District Court has jurisdiction over cases whose punishment is less than 3 years of imprisonment.

The judge was requested to order a DNA test to decide the paternity of a child.

"Everyone was shocked when he announced his judgment,” Guleid added.

The DNA test was asked by the lawyer of a woman with a disability who claimed that she was raped by a taxi driver. The prosecution told the lawyer that they do not have enough evidence as the man denied the accusations.

Fardus Adam, the lawyer, opted to acquire DNA evidence to convince the prosecution to take the case. To make the evidence acceptable, the lawyer asked the district court to order a DNA test.

"This is not the first this particular judge has imprisoned someone without due process of law. In parenthood case, he sentenced the losing party to imprisonment. I offered a free legal service to lodge an appeal. And the appeal court quashed that previous judgment because there was no criminal case before them. This case has a similarity, but it is worse,” Guleid added.

Somaliland Daily has seen a copy of the judgement.