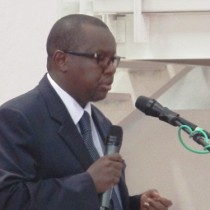 Hargeisa- The former minister of justice, Abdiqani Ateye, who is now the defence minister, said a letter circulated in the media claiming that he ordered the arrest and extradition of Somaliland businessman is fake.

The letter in question widely shared on social media angered the public because it ordered the apprehension and extradition of Ahmed Osman Guelle to Djibouti, the CEO of GSK. The Minister said he never wrote the letter.

Guelle hails from a prominent business family. He used to run businesses in Djibouti before his relations with the ruling family soured, and he fled to Hargeisa, where his businesses include Coca Cola subsidiary.

According to reliable sources close to the judiciary, a case will be opened in Hargeisa by a Djiboutian bank against Guelle to demand 25 Million US Dollar.

Traditional leaders from the clan of the businessman spoke to the media yesterday and accused the government of Somaliland of siding with a dictator who wants to rob money from a Somaliland citizen. They alleged that the President of Djibouti and his family have forcefully confiscated hundreds of millions worth property from Ahmed Osman Guelle.

The President of Djibouti wants to take more money and property from the businessman in Hargeisa using Somaliland government’s sympathy, they claimed.