The President of Somaliland Declares State of Emergency 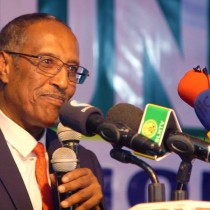 Somaliland Daily translated the State of Emergency Law issued by the President of Somaliland. Here it is:

Having Seen: article 92 of the Constitution of Somaliland;

Having seen: the hostility existing in districts of Sanag region which can endanger the general security, the existence of the nation and the constitution of the country;

Having seen: the recurrent insecurity of the districts of Sanaag region where the government and different sectors of the society invested efforts of life and property;

Having seen: that it is a national obligation the government to take strong measures to stop dangers of insecurity in order to ensure peace and to safeguard the lives and property of the people of the Republic of Somaliland;

After making consultations with the chairs of the two house of the Parliament (the Guurti and Representatives) and the National Security Committee;

1)Three months of State of Emergency is imposed on Gar-adage, Eil-Afwayn and Erigavo districts of Sanaag region.

1)the National Army of the Republic of Somaliland shall take every measure to protect the security, and prevent anyone who is engaged or seems to be taking actions of insecurity.

Article 3: The Administration and Decisions During the State of Emergency

1) The National Army shall take over the administration and all decisions to protect peace [and] prevent dangers of insecurity.

The President of the Republic of Somaliland