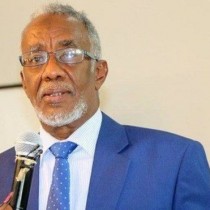 Yasin Hagi Mohamoud, Foreign Minister of Somaliland
Hargeisa- In a statement released today by the Ministry of Foreign Affairs of Somaliland says "the Government of Republic of Somaliland expresses its deep alarm and regret over the flagrant and vicious attack by Puntland Militia."

The incident in question happened in Hadaftimo, east of Erigavo, the administrative capital of Sanaag region.

Both Somaliland and Puntland claim the territory.

The statement adds that "a convoy of Somaliland officials, including the Governor of Badhan, as it passed through the Hadaftimo District of the Sanaag Region yesterday around 12:45 pm” was attached by Puntland.

The Ministry states that "such actions represent a dangerous and regressive step in previously improving relations between Somaliland and Somalia’s regional administration of Puntland, following several goodwill gestures, including the recent transfer of war prisoners.”

Somaliland and Puntland fought in the region in a number of times.

The statement was released today. Puntland is yet to respond.

Read the full statement from this link