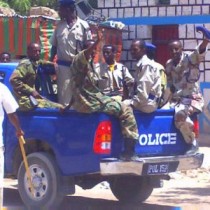 They have been rounded up by the Rapid Reaction Unit (RRU) of the Police. They were immediately taken to Hargeisa Central Prison, hundreds of miles away from their homes and families.

They were never brought before a judge.

In 2018, clan clashes happened in Eryan village (Ceeryaan in Somali) between two clans. Three people died, according to the government officials. The Rapid Reaction Unit, a paramilitary police unit, was deployed at the area. The RRU rounded up the four people.

Article 27(2) of the Constitution of Somaliland says "any person who is deprived of his liberty because of alleged criminal offences shall have the right to be brought before a court within 48 (forty-eight) hours of his arrest.”

"They have never been brought to court. No charges are pending against them. There is no charge sheet. No criminal report filed with the court or the prosecution office" says Yasmin Omar Haji Mohamoud, the chairperson of Human Rights Centre.

They have been in prison in thirteen months without a trial. Article 47(3) of the Somaliland Criminal Procedure Code states that "until the date of the a trial has been fixed, an accused in custody shall be brought before the judge every seven days.”

"It is clear that the Criminal Procedure Code has been violated. You cannot put someone in prison indefinitely without trial,” says Yasmin adds.

Contrary to the Juvenile Justice Law and international human rights standards, two of the detainees are children under the age of 18.

"The authorities cannot use clan conflicts as a pretext to set aside the constitutional guarantees. It is this time you should test the credibility and strength of the institutions. The judiciary shall function not only in peacetime but also during armed conflict,” She added.

Article 9(1) of the International Covenant on Civil and Political Rights says "everyone has the right to liberty and security of person. No one shall be subjected to arbitrary arrest or detention. No one shall be deprived of his liberty except on such grounds and in accordance with such procedure as are established by law.”

Article 9 of the Universal Declaration of Human Rights states that no one shall be subjected to arbitrary arrest and detention”.

Human Rights Centre calls on the government of Somaliland to respect its constitution and release jailed people who are held in prison without due process of law and to stop other similar imprisonments taking place in Sanaag region.

The Centre calls on the judiciary to protect liberties and safeguard that arrests carried out in Sanaag are made in accordance with the constitution.