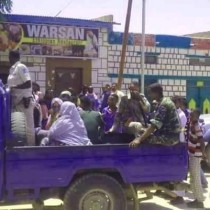 Hargeisa- The police in Burao, a city located in eastern Somaliland, has closed down an Ethiopian restaurant.

Warsan restaurant is one of the few restaurants that allow men and women to dine together. It serves Ethiopian traditional dish.

Today, the police arrived at the restaurant and ordered its closure.

The Ethiopian nationals who were working at the restaurant were taking into the police station.

There is no law prohibiting men and women to sit together in public places. But in Burao, men and women are prohibited to attend weddings together.

Music is already banned in hotels and other public places in Burao.

This move to shut down a restaurant is unprecedented and shows a growing trend in Burao.