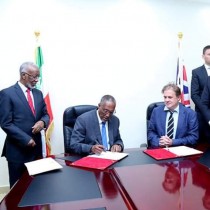 Hargeisa- On Monday, President Muse Behi Abdi received UK delegation led by the British Ambassador to Somalia, Ben Fender, at his office.
The delegation including representatives from the Department for International Development (DFID) discussed with Somaliland different issues including democratisation process of Somaliland and development.
"I had a productive meeting the UK Ambassador and a delegation from DFID today in my office,” president Behi said in a tweet.
"The government of Somaliland and UK have jointly signed the implementation phase of the second phase of SDF II [Somaliland Development Fund],” the president also said in another tweet