Skirmish between lawyers and the courts solved, says lawyers association 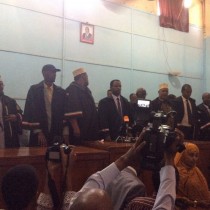 Hargeisa- According to the chairperson of Somaliland Lawyers Association, Mohamed Hashi, a disagreement that erupted between lawyers and courts have been resolved amicably.

On Monday the chairperson of Hargeisa Appeal Court, Ali Sudi Dirie, has suspended three lawyers from practising law and ordered four lawyers, including the suspended ones, to be investigated for circulating "false news and propaganda” detrimental to the honour of the judiciary.

The decision of the judge came after four lawyers on different occasions complained about the treatment of defence lawyers in Somaliland and criticised how the judiciary operates.

Lawyers met on Wednesday and assigned a committee of lawyers to meet the Chief Justice about the subject.

According to sources present at the meeting, today the lawyers met the Chief Justice, Adam Haji Ali Ahmed, along with the chairpersons of Hargeisa Appeal Court, Hargeisa Regional Court, Hargeisa District Court and Supreme Court judges.

The leader of the Lawyers Association held a press conference after the meeting. He told the media that they decided to reach an amicable resolution of conflict and work together.

Committees consisting of the courts and the lawyers will be assigned to discuss technical issues, he said.

"We gave an apology to the judiciary about the statements made by the lawyers,” he said.

The courts will rescind the suspension and order of investigation, he added.