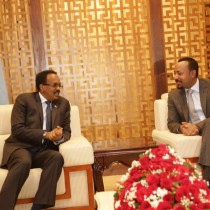 Hargeisa- The Information Minister of Somalia denied reports stating that Somali soldiers sent to Eritrea for training have been killed in Ethiopia's Tigray region.
Minister Osman Dube did not deny or confirm the presence of Somali soldiers in Eritrea.
Ethiopia's government has been at war with the Tigray regional administration, and there are unconfirmed reports of Eritrean support. The Ethiopian government, which called the war operation for restoring law and order, denied Eritrea's involvement.
Somali opposition leaders and citizens who claimed that their family members died in the Tigray region asked the government for an explanation.
Besides denial, the government is yet to make explanations.