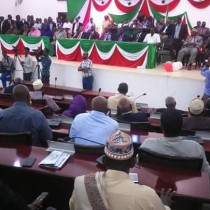 Oldoon was once arrested for supporting Somalia’s president and received strong advocacy from local human rights organisations in Somaliland that believe in freedom of speech.

However, after spending jail term, he was pardoned by the President. After his release, Oldoon started preaching extremism. In series of Facebook posts, he called the Parliament of Somaliland apostates who act like God.

He encouraged the public to take action against what he sees as un-Islamic Somaliland.

Many Muslims see apostasy as a crime punishable by death. Calling entire Parliament, judges and court officials as apostasy is a death sentence.

His onslaught also targeted civil society organisations and educational institutions. Hargeisa Cultural Centre (HCC) and Abaarso schools have been the main target. For fear of suicide attacks, people who spoke to Somaliland Daily said they are refraining from visiting the Cultural Centre due to the calls of Oldoon.

Facebook, which gave him a platform to preach hatred and violence, attracted more like-minded people to join his attack against women, girls, and institutions

Oldoon accused the school and the HCC of promoting homosexuality and Christianity.

People close to the investigation of Oldoon said he is investigated for connections with al Shabaab, particularly for fundraising and recruitment.

Abaarso schools issued a statement that denied the allegations.

The case of Oldoon also indicates the shortcomings of Facebook when it comes to people who do not speak European languages. Facebook seems to fail to monitor those who violate its community standards in the Somali language, making it a very unsafe place for many people, including women and girls.