Opinion on Digitization of Somaliland Shilling 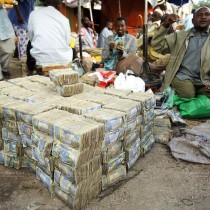 Hargeisa- I am absolutely against the transfer power of instrument in the country such as (the currency) to private oriented business companies which are scandal to the standard of banking system. Having said that, I am going-back on 31st January 1995 when Somliland has issued Somaliland shilling and accepted it as a legal tender in Somaliland. Since that central bank provides exchange rate service from that date. Although in 2000 the official exchange rate of the Somaliland central bank was 4,550 shilling for 1 US dollar, later in December 2008, the official rate had risen to 7,500 shilling per US dollar and from that date the value of currency has been fluctuating.
As we all aware of, in 2002 Somaliland telecom companies established and were given license to operate in Somaliland within objective based to provide and supply the local market with GSM, Mobile service, fixed line and internet service. Today, these telecom companies are currently busy on new system of electronic digital transaction in the country which is not a valid tender in some part of Somaliland, especially in East, South Sanag, Sool and Ayn region of Somaliland. As result of lack of community acceptance and willingness to use and trust it. In addition to that, the coverage of these companies they operate their business entities is limited. Another setback emerged last week by Wikileaks disclosures and disseminated information concerned about Somaliland telecommunications are involved a surveillance program towards tendency security issues. And this it may hazardous adversely affect the trusteeship to use it both means of communication and as a bank with respect to sharing information into third party.

In the worst scenario, I have experienced that the government digitization policy of Somaliland shilling invest part of large inflation rate exhibits a depreciation value of shilling as its purchasing power increases relative to dollar which associated increased money supply which inevitably causes inflation rather than to decrease the rate of inflation.
As the article 3 of the 1994 Law stated that the principal objectives of the Bank of Somaliland as being: "… fostering monetary stability, maintaining the internal and external value of the Somali shilling, and promoting credit and exchange conditions conductive to the balanced growth of the economy of the Republic, and within the limits of its powers, it shall contribute to the financial and economic policies of the State”
In my conclusion, If the central bank’s policy towards digitization Somaliland shillings go ahead as the planned to transferring private business sector, it means that the Central Bank is an able to provide services and state of defaulted its own obligation to control monetary policy.
I personally believe the only open option which the government could overcame this inflation is to create a wise austerity measure by reducing unnecessary government expenditures and restore back to it’s obligation and regulate the country’s central bank.
I have the below questions to be answered:-
About the author

Economist based in Erigavo, Sanaag region of Somaliland