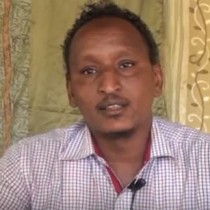 Ahmed Mouse Sakaaro
Hargeisa- An appeal court in Buroa, east of Somaliland, quashed a regional court decision which cleared journalist Ahmed Mouse Sakaaro. The court ordered retrial of the journalist.
Ahmed was arrested on 25th September 2016 in Buroa. He was charged of inciting violence after he condemned statement made by the Minister of Presidency who said his government will liberate from the country what he called pirate journalists.
The Office of the Attorney General filed a criminal case before the court of first instant of Togdheer region. The court accepted a preliminary objection raised by the lawyer of Ahmed who argued that the case is under the mandate of the Press Law not the criminal law. The court closed the case.

The Office of the Attorney General appealed to the Regional Appeal Court which today agreed the Attorney General and said the case should be retried in accordance with the criminal law, Ahmed told Somaliland Daily.
Ahmed said he will appeal to the Supreme Court to challenge the ruling which is quickly criticized by the human rights organizations. Guleid Ahmed Jama, the chairperson of Human Rights Centre said "The order to retry journalist Ahmed Sakaaro is another move to use the courts to suppress media freedom.”
About the author

Mohamed J Ismail is a reporter for Somaliland Daily