Will the newly elected president of Somalia renounce his US citizenship to end the conflicting loyalties? 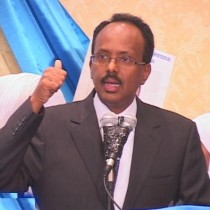 President Mohamed Abdilahi Farmaajo
Hargeisa- Under heavy security in an aircraft hangar at the international airport of Mogadishu, the members of the parliament elected Mohamed Abdilahi Farmaajo as the president of Somalia. Farmaajo has a dual citizenships.
Let alone the public to participate in the vote, the members of the parliament could not convene their meeting at the city and were forced to gather at the airport at the behest and protection of African peacekeeping troops called AMISOM.
Farmaajo, who shortly served as a prime minster, promised in his long campaign trail to work for Somalia without outside interference.

Because of his nationalistic tone and strong criticism of external interference and dependence, he gained popular support among the people of Somalia.
He kept repeating that Somalia will exercise its sovereignty, and that the foreign troops will leave Somalia’s soil, if he get elected.
Farmaajo has a dual citizenship as most of the other candidates are. But he is different. The rest did not question as he did the loyalty to their country.
At his short victory speech, he said "this victory represents the interest of the Somali people.” This has been his main campaign message: the true candidate of the Somalian people.
Will he then renounce his US citizenship and serve as the President of Somalia? This could be the beginning to assess the authenticity of his claims.
The dual nationality of a head of state is a matter of ambiguity of loyalty that Somalian people cannot afford at a time foreign interference is very visible in Somalia politics. As a candidate who vowed to serve only for Somalia, it is the time President Farmaajo to come forward and renounce his US citizenship.

Guleid is a practicing lawyer and researcher at the Centre for Policy Analysis. He holds Bachelor’s Degree in Laws, MA in International Relations and is currently MA candidate in Peace and Conflict Studies.