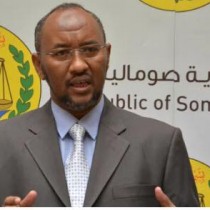 Hargeisa- Heavy weight politicians in both camps expressed support for a declaration issued on 18 May by citizens.

Faisal A. Warabe, the chairperson of UCID opposition party, Hersi Haji Ali Hassan, the Leader of Waddani opposition party, and Ahmed I. Samatar, a prominent academic and senior leader of the ruling Kulmiye party, expressed appreciation for the movement in different occasions.

"A day of specific commemoration is among the most appropriate of moments to bring out both celebration and intelligent critical reflections about the past, the present, and the future. This is particularly the case for a society genuinely concerned about the state of civic temper and the operations of its central institutions. Here are some sobering voices from the youth of Somaliland. I hold that it is of high value to listen to them and judiciously think through their concerns,” Professor Ahmed Samatar said.

The two leaders of the opposition parties also supported the declaration. Faisal A. Warabe said actions need to follow. Hersi Haji Ali Hassan said the Declaration is the interest of Somaliland.

Here is the full Declaration:

We, the undersigned Somalilanders, issued today, 18th May 2020, the Peoples’ Declaration: