'Bitter and Sweet': A flavor of Qaasim's Contribution to Leadership Theories 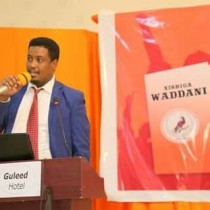 Hamse Khayre
Introduction: Even though the fact that Somalis have rich oral traditions is largely agreed upon by Somalis themselves and researchers who visited East Africa both in ancient and modern times, significant effort had not been spent on reflecting the lessons that can be learned.
Some writers, for example, refered the land as the ‘nation of poets’. The contents and substance of this oral literature was unrecorded due to the absence of Somali script, and, if any, access to it is limited to very few. Apart from the introduction of the Somali orthography back in the seventies by the military regime, no other attempt, at national level, has been made to write Somali poetry in a way that is appealing to contemporary Somali youth. Furthermore, the link between modern education and the Somali way of life, as embodied in its oral wisdom, is thematic area was never given it is deserved attention. This latter gap resulted in that some question the relevance and value of the lessons (if any) learnt in the past.